This week in Alexandria Egypt the first 2,000 year old Temple known of dedicated to the CAT (Tiger-2010) Goddess Bastet was discovered. 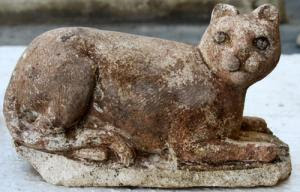 A statue of the cat goddess Bastet

BBC: "The temple was filled with statues of Bastet, a once fearsome lion-headed goddess whose image changed over time to a domesticated cat

Archaeologists in Egypt have discovered a 2,000-year-old temple in Alexandria dedicated to a cat goddess.

The temple is the first trace of the royal quarters of the Ptolemaic dynasty to be revealed in Alexandria.

The find confirms the Greek dynasty of Egyptians continued the worship of ancient animal deities.

Many more ruins of the ancient capital of Hellenistic Egypt lie preserved under the modern city, yet to be unearthed, archaeologists say.

The temple, discovered in the Kom el-Dekkah neighbourhood of the city, is believed to belong to Queen Berenike II, wife of Ptolemy III who ruled Egypt in the third century BC, Egypt's Supreme Council of Antiquities has said.

The Greek-speaking Ptolemaic dynasty ruled Egypt for almost 300 years, after the foundation of the city by Alexander the Great in 305BC until Queen Cleopatra was ousted by the Romans.
The Temple to Bastet in Alexandria
The temple is the first part of the royal palace to be unearthed

Archaeologists found statues of Bastet, worshipped by the Greek-speaking Egyptians as the moon goddess.

For thousands of years the Egyptian Pharaohs believed Bastet was a lion-headed goddess, a relative of the sun-god Ra and a ferocious protector.

But her influence waned as the Pharaohs declined, and the Hellenistic Egyptians resurrected her as the equivalent of the ancient Greek deity Artemis.

Other artefacts were also discovered in the dig, including pots, a Roman water cistern, and the granite statue of a senior official dating from between 205BC to 222BC.

Modern-day Alexandria was built directly on top of the ancient city, and archaeologists say ruins of whole cities, palaces and ships remain to be discovered.

The Ptolemaic kings of Egypt were descended from Ptolemy, one of Alexander the Great's most trusted generals during his conquests of Egypt, Persia and his attack on India.

After Alexander's death, Ptolemy returned to Alexandria to become king and his descendants ruled until the Roman leader Octavian - who later became Emperor Augustus - defeated Cleopatra, the last of the Ptolemaic line.

Leading Egyptian archaeologist Zahi Hawass said the temple may have been used as a quarry in later years, as there are a large number of missing blocks."- http://news.bbc.co.uk/2/hi/8468803.stm

Sphinx = Dark Vador = CATaCOMBs
Posted by Indras Net at 7:02 AM