The Plane Between the Obvious and the Invisible

"P O O K A - Pooka - from old Celtic mythology - a fairy spirit in animal form - always very large. The pooka appears here and there - now and then - to this one and that one - a benign but mischievous creature - very fond of rumpots, crackpots, and how are you, Mr. Wilson?" "How are you, Mr. Wilson?" Who in the encyclopedia wants to know? " -from the movie Harvey


This article is in relation to another post... You can find it below.

There's a trick to watching Transformers' movies... Did you know this? What you have to do is, you have to listen. Let's face it, they sell popcorn, but, for the majority of people out there that think that the band Nirvana was probably on to something, these movies are all eighty's hairband. Know what I mean? We hate big budget and think its all Superbowl halftime. So I suggest... To just listen to the movie. I mean, if you have to go see it... With your kid or someone else who likes explosions... Grit your teeth and listen.


There's this one character. Bumblebee is his name, and he has no voice... Well he has a voice but it's not his voice... It's just sound bits from the radio and old movies and TV shows and such. The thing is this, new Transformer's come in to develop a sequel's story, and these Transformer's need voice talent to bring them to life. Enter Guest Star. Now what "Team Transformers" does is take past movies that "Guest Star" has done,  and clip some sound bits from them.... And presto! Now you have Bumblebees voice for said flick. For instance, Transformers 4 "guest stars" John Goodman... So when you watch it, listen for the Big Lebowski quotes to roll out of Bumblebee's mouth. Try it... It's fun.

Listen to Bumblebees voice specifically, and see the theme. In the case of Transformers 3 it's Leonard Nimoy. He plays this character named Sentinel, you see. The point is that if you pay attention... Transformers: Dark of the Moon (or simply Transformers 3)
Is covered wall to wall in Star Trek quotes... It's almost comical if you don't catch it the first time. Was for me at least. When I finally figured out who Sentinel's voice was... It was hilarious.

Sentinel is found on the moon in something called an Ark(see Rainbow) surrounded by "Pillars"...

They made it simple so some "pillars" are blue, and there is one that "controls" the others... It is red. Multiple Pillars.... Ones Red the rest are Blue.

Above you can see them clearly.... Sentinel AKA Leonard Nimoy standing center between Red and Blue "Pillars". 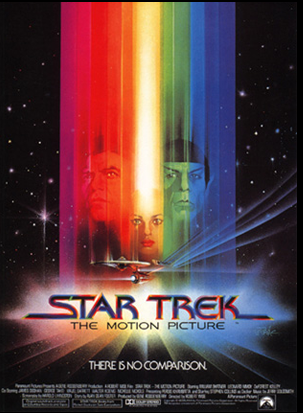 The Pillars are apparent in the poster above used by Kevin and the whole Sentinel guardian of the pillars thing totally falls in line with his interpretation. Connotation of the Moon's involvement.... Undercurrents of the Enterprise being the Ark. Rainbow after the flood. I don't know it's kinda weird. 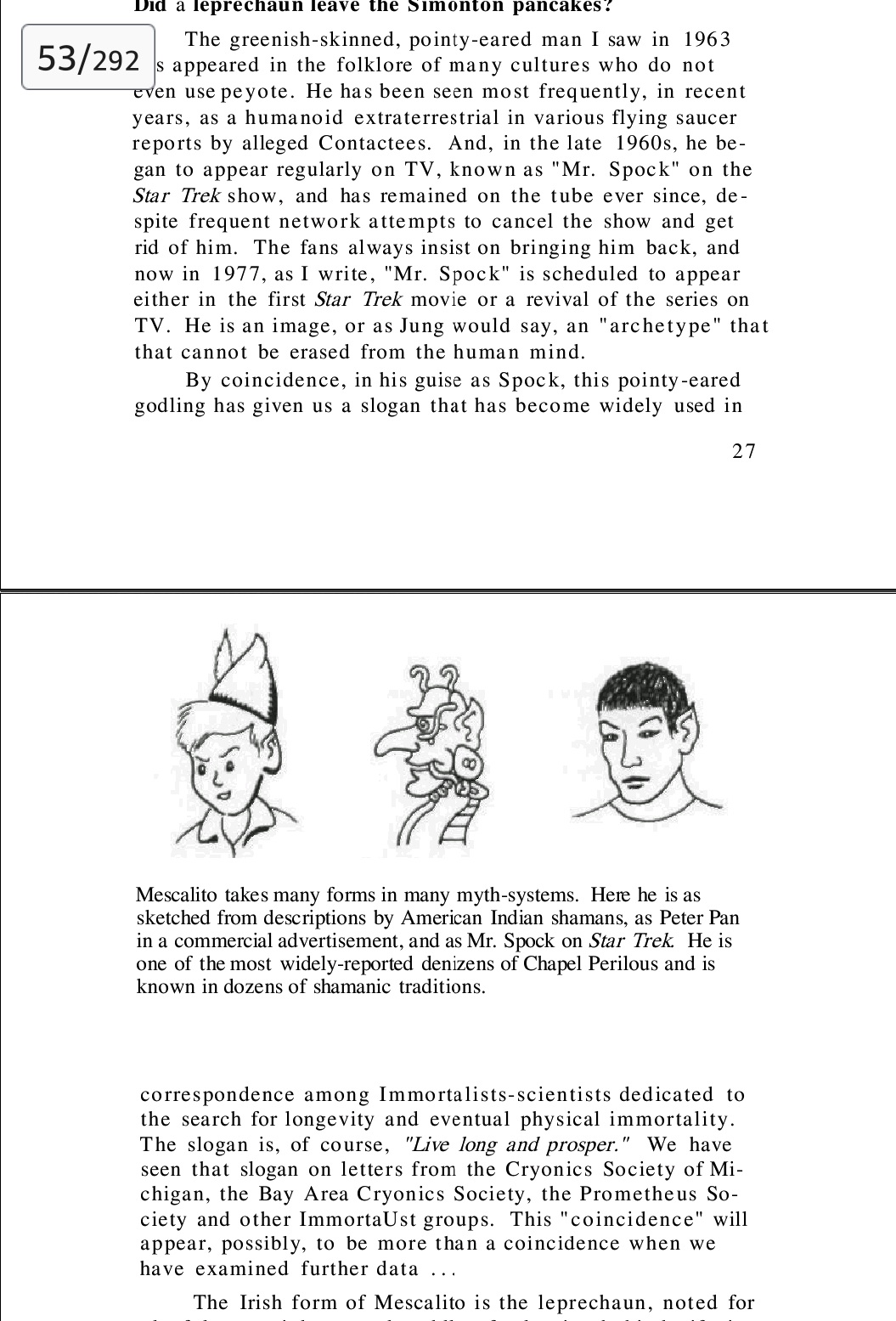 Here's the catch. As pointed out by @indradhanush42 Robert Anton Wilson experienced "Mr. Spock". Mr. Spock becomes this never Dying god of the Rainbow. Who joins the two worlds. Basically the Transformers plot which references the Moon... In a "Sync" way, the moon is the joint of this world and the "other" world. Earth, Moon, Jupiter. Or perhaps if you like, Cybertron... What I call The Land Of The Dead. Never never land. But also you can see it as Fairyland or Otherworld, The Twilight Zone. Mr. Spock is simply a symbol of The Other. Experienced and articulated, better than I ever could, by Robert Anton Wilson.


In tow of this theme... As Kevin points out is Bill Shatner, I'll let you imagine what he represents but Kevin's comment about his affiliation to planes is what I want to talk about.... Spock is the "Pillars", Kirk is the "Plane". And if The Enterprise can be looked at like a "plane" between 2 pillars... Then that makes me smile.

"I first heard of the 23 enigma from William S Burroughs, author of Naked Lunch, Nova Express, etc. According to Burroughs, he had known a certain Captain Clark, around 1960 in Tangier, who once bragged that he had been sailing 23 years without an accident. That very day, Clark’s ship had an accident that killed him and everybody else aboard. Furthermore, while Burroughs was thinking about this crude example of the irony of the gods that evening, a bulletin on the radio announced the crash of an airliner in Florida, USA. The pilot was another captain Clark and the flight was Flight 23." -Robert Anton Wilson

One of the often logged factoids of the 23 Enigma is the trivial depth charge that Star Trek actually takes place in the 23rd Century. This is not meant to be a powerful insight, but under the necessary "maybe language" of Sync consciousness it blows minds. The Enterprise is Flight 23. The Flight in the 23rd Century to where no man has ever gone.

I started noticing that when I looked at list people had made about the number 23 on the internet... They almost always included a movie reference... And a lot of the movies had to do with an airplane. I started forming this concept in my mind that I called it "Flight 23"... This was way before all these missing planes started poppin off everywhere. You can learn all about all the recent year's of mysterious plane syncs, and I'm sure they will continue, from following Sync Head Loren Colman over at his blog Twilight Language. He has inspected many of these planes that "hit" the headlines(and global consciousness) and... It might be just me... But, I swear 23's happen all the time.

Above are the Sync Quick News that highlight Alan Green's work and sourcing the Sync Community at large.

These all in together create a bigger picture. 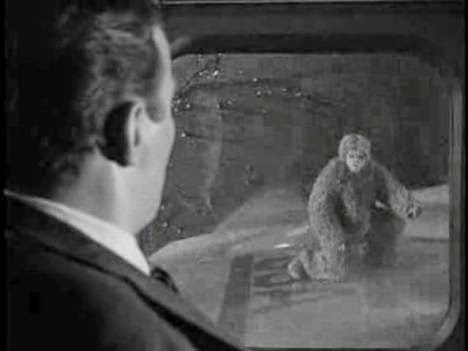 This is amplified by the fact that Mr. Shatner is actually playing Bob Wilson... AKA Robert Wilson, in this specific Twilight Zone that Kevin mentions earlier.

Then you can kick that up to eleven when you check it out on Wiki.

""Nightmare at 20,000 Feet" is episode 123 of the American television anthology series The Twilight Zone, based on the short story of the same name by Richard Matheson, first published in Alone by Night (1961). It originally aired on October 11, 1963." -Wiki

This particular episode, that is to say "Nightmare at 20,000 Feet", has been done SO many time... It has been parodied up on wall and down another, and seems infested by the number 23... Please check out this hilarious version from Saturday Night Live starring Jude Law... Not only is it funny, and only 5 mins long, but if you pay close attention... You will get a surprise towards the end. Jaw dropped. 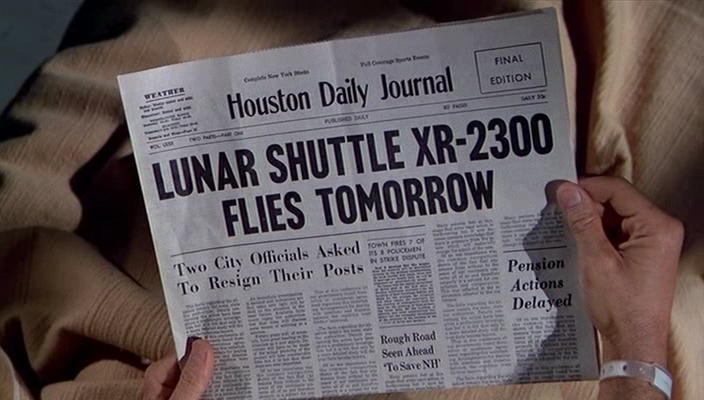 Oddly enough, another reference I found to the number 23 featured on multiple list also focuses on the moon as well. Airplane 2: The Sequel apparently was a big "ah ha ha" to quite a few Sync Heads out side my understandings and whims. Turns out that the Lunar Shuttle that that movie is about is called the XR-2300. This movie is also funny, AND Syncy, complete with 2001 a Space Odyssey references and everything... 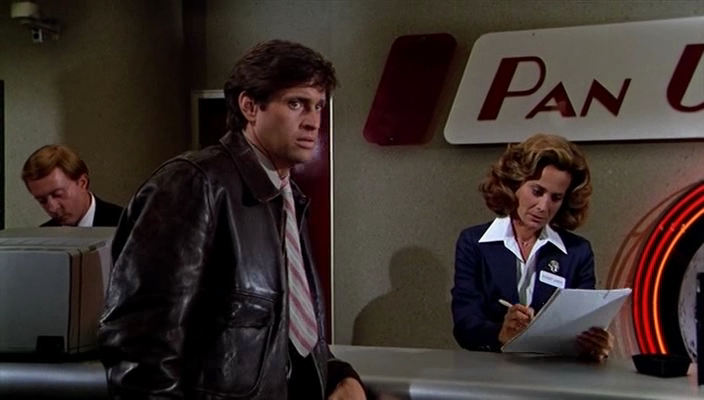 This movie is crazy, I'm telling you. No doubt. Nothing makes sense and everything everyone says breaks logic. And... To be honest, I think that's the point. Nothing in this movie is not for your amusement.... Get it? You're point of view... Like when viewing the rainbow... Is key. You are very literally "in on it". It is an "Otherworld". Physics is bullshit, and fear is an illusion. 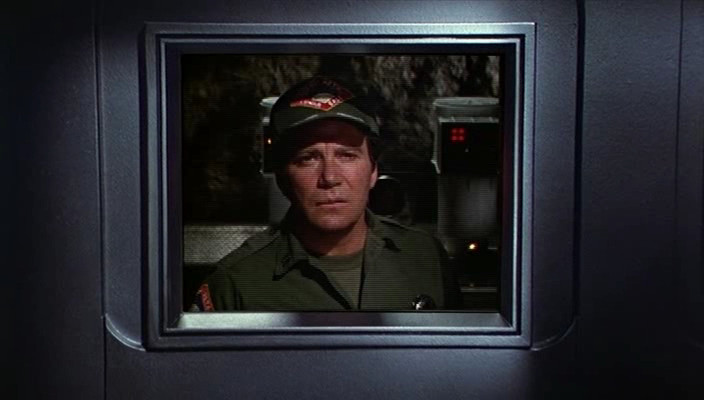 When they get to the Moon they are meet by the Moon Commander Captain Kirk/William Shatner... It's a loop for sure... Landing us right back on the Moon in the same spot we found Spock to open this post. Bill Shatner, seen here is also looking through a window again... A looking glass... Airplane window... Port hole... Almost making the audience the Phooka.

Flight 23 is the story of disappearing and reappearing planes. It is a new plane of consciousness . A new plane of understanding. It is departing knowing you saw planes that hit buildings and arriving at the understanding that you don't know what you saw.

It is a trip to the moon. And as co-pilot, Charles Fort with Captain Clark at the helm... John Keel on coms. Of the 23 crew and passengers aboard we find William S. Burroughs in first class. He sits with his chin resting against the window sill. The storm passing outside painting dreams on the inside of his eyelids. Just past the curtain we start to hear Alice Bailey. She sits talking to everyone at once, like the polite grandmother showing pictures of her grandchildren that you might find on every other airplane. She says he will come... Riding an airplane and then appearing on TV. Someone mentions 9/11 but their voice soon fades to the background as somewhere near the middle of the plane Robert Anton Wilson shouts "Look everyone there's a Phooka on the wing!"...

Rushing to the windows everyone sees Frank from DONNIE DARKO... The 24th passenger... He rips off the right engine and sends it huddling into Jake Gyllenhaal's bedroom miles below. Everyone gawks as he opens his arms, crouched, and disappears into a cloud as lightning flashes.

To stifle panic Robert Anton ask everyone in the rear of the plane to describe the cabin to the best of the memory... He says "See?" looking like Lao Tzu with a Brooklyn ascent. "We are all on different planes, non of us are on the same plane."

And somewhere way in the very back, due to how late he was in receiving his ticket... A pointed eared man sits with his hands in the shape of the Hebrew letter Shin. Waiting for the one who has always been and who shall always be his friend....

Flight 23 is a symbol set that you can find on a legend. On that map, an arrow in the middle saying "You are here", and surrounding that the words printed "Here there be monsters". It is a map of The Twilight Zone, where no man has gone before.
Posted by A Few Shots to Shaman at 8:43 AM 8 comments: Links to this post