"Do you have any Tobacco?" and the Holy Moment

Kevin: Just wanted to shoot a link up here to a new video I mixed up this weekend, enJoy!

Do you have any Tobacco? from Kephera on Vimeo.

The recurrence of Boats, Canoes, Vessels and Chariots as symbolic of the Spiritual journey into the underworlds of other Dimensions of consciousness as well as out of body travel. Also the use of Tobacco plant used as a protectant in journeying into other dimensions or realities.

UPDATE: What are the odds that AFTER publishing this I would realize TWO 42s* on the side of the Waking Life underworld Boat upon reviewing the published version of my video, the Joy! Take a look at this unintentional Synch in this scene, where I was only Conscious of the Boat when Publishing. 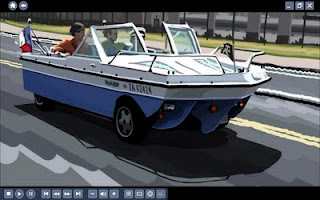 Absolutely amazing to find another Underworld Layer to this beutiful Scene, the Boat to the Underworld in Tarot is represented by the Chariot Tarot Card which pictures a Golden Charioteer who looks alike a Crab hinting toward the Cards Zodiac Sign of Cancer, the Crab or Beetle which pushes the sun up from the Underworld. The Beetle can be Seen as a Scarab and a Lobster on the Moon Tarot Cards, the Moons home Sign is Cancer, the Crab/Lobster, and Aboard the 42 Underworld Boat there is a Lobster on the Dash next to the Charioteer. 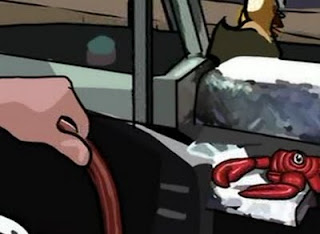 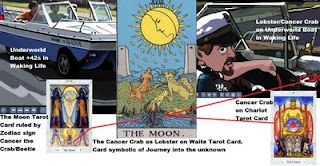 Heres some stuff I didnt throw in the post originally but ill add context. Sleep or entering the Rabbit Hole/Stargate/Portal to the Dream/Underworld happens when the Moon rules over the Skies, The Moon who rules the sign of Cancer, represented by the Chariot Tarot card, and the Sun beginning its Southward movement into the Underworld where it Rises again from the Underworld on ChrisTmas. The Moon has been very big in POP lately, I do beleive this has to do with the merging of our Dream/Energy plane uniting with our Physical world in consciousness. The Moon can also be symbolic of our return to the Feminine, and the Flows of Waters which the Moon and Cancer + the Chariot (merkabah) Tarot card all have esoteric rulership of. The Boat/Chariot Ride archetype is SUPREMELY! Connected to the Chariot Tarot Card, the Merkabah or Body of Light or Chariot of God from he ancient Western traditions, and the Yellow Submarine as explored Previously is another dimension of the Golden Beatle Chariot as demonstrated here. This subject is huge, but I do beleive that it points toward our Soul/Energy bodies being the vessel of our Spirit throughout our Earthly and Astral movements.

Alice Bailey had said that the Age of Aquarius would bring an Astral Cleansing or Washing from the cup of life over the LIGHT BODIES of all men, vitalizing and also making all men understand the universality of Life which is in the water as well. We can see the Moon/Underworld/42/Rainbow Bridge/Jupiter-Heaven merging with our Earthly plane these days, and as that happens I would hope many of us are inspired to get in touch with our inner light bodies and our inner selves or Higher Selves. The Merkabah is exactly that, it is our Light body or the Self that we perceive ourselves as in our minds Eye. Mer-Means Body, Ka- Means Light and Ba- means Spirit. Mer is a word connected to Water, our bodies are 70% water, Ba is the physical earthly form of our Body, and the Ba is the Spirit that animates our light and physical bodies , to me Light is the Garment of Spirit. The Merkabah is an ancient term which can be seen described in Ezekiels vision called the Chariot of God with 4 angels guarding each Direction, those being the 4 Constellations and Stars that mark the 4 Corners of Space as marked by the Platonic Zodiac signs Aquarius, Leo, Scorpio and Taurus, each being home to a different Element, type of wind, aspect of our Body/Mind and Nature and slew of other esoteric influences. But the Chariots connections to the Corners of Space to me symbolizes that wether we open or Close our eyes, we are perceiving the Universe, and thus organically one within its web of creation. I also heard recently that the Ancient Chinese astrologers also saw the Big Dipper or Cancer Constellation as what they called "The Chariot of the North" and was also connected to Passing on into the Afterlife/Underworld. Tobacco used to be gifted to those who were entering Physical or Astral Journies, in life and in death. Tobacco in numerous cultures is identified with the Fiery Masculine Planet of Force and Motion, We can even see the Red Sphere behind the figure on American SpiriTs.

Timely as the flow always is, MARS is where scientists beleive that BACTERIA from an ancient METEORITE in Antarctica is from. See Here .

I do really recommend reading into the Merkabah as well as the symbolism of the Moon as it seems being is tapping us on the shoulder with more and more hints at understanding these forms. Anywhoo, wanted to drop this stuff in here, More on the Merkabah here!

Anyone who appreciates the Synchromystic worldview would really really appreciate this Scene from Waking Life this time around, who would have known that this scene would carry such heavy potency in Me/Wes lives! Beutiful really beutiful movie!! This Scene is called the Holy Moment, it may as well be titled : SYNCH

Music in the video is "42" By ColdPlay, and "Buffalo Hologram" by Brightblack Morning Light. Also the Chant of the Heart Sutra.

Much love to all, peace in out and all around! :)