Greetings WolFstars! I wanted to share "Something Wonderful" that I caught in a commercial while visiting my hometown on Long Island this past week. My Journey always carries me through the arms of Hermes Mercuryon 42nd Street Grand Central Terminal who grant travelers protection in the flow of travel. 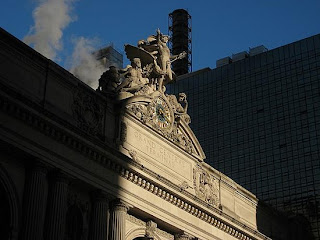 My journey from Upstate NY to Long Island is always full of awe and interesting synch, as I always pass through the Galactic Central Terminal on 42nd Street. 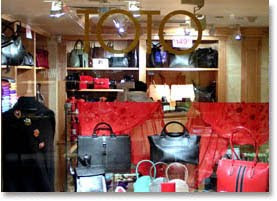 and one of my favorites is the store named Papyrus. Im reminded of The Egyptian " Papyrus* of Ani" which is an ancient Egyptian Document that features details of the 42 Asessors of the Dead in the Courts of the godess Maat in the Duat or Underworld/Afterlife.

So theres a Store named Papyrus in Grand Central Terminal in NYC, this really reminds me of the Patrick Swaze film Ghost where he plays a Ghost who passes through Judgement in just this train station, 42nd Street. 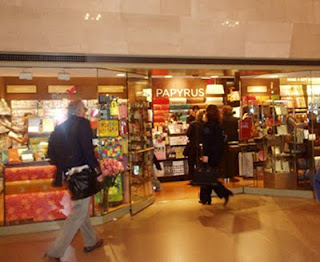 Papyrus on 42nd Street above, Below here is the Papyrus of Ani in Egypt in which the Heart is Weighed against an Ostrich Feather while the Soul confesses exactly 42 commandments in order to be Rebirthed. There are 42 days of incubationin the hatching of an Ostrich Egg, just one of many reasons Maat wears the Feather. 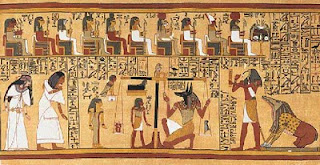 Patrick Swayze mirroring the Papyrus of Ani flow in the Film "Ghost" on 42nd St Grand Central Terminal, Swayze plays a Ghost trying to be Reborn into the Physical world. 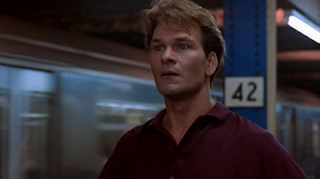 getting back on track here

I arrived home for a day and caught up with some old freinds, almost all of which dont know what kind of "work" we do here @ the Synch Whole and such. After some catch up we ended up sharing funny youtube stuff and I was shown this lovely Old Spice Commercial.

Actor Terry Crews is featured in the new 2010 Old Spice Commercials. Hes Super Pumped as I hope we all are this year, see the video below here.

@ 24 Seconds we can see him Riding the Tiger and then at 1:16 he celebrates Double Sun Power!

Heres some Screenshots and why this is Synchnificant this year.

Terry Crews rides the Tiger in this Old Spice Commercial from 2010. 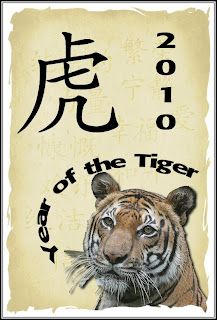 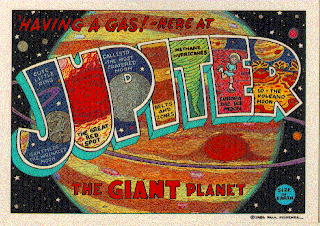 and in the film "2010 the Year we make Contact" Jupiter plays a Major role as featured on the Cover image here below.

In this film humanity makes Contact with ET intelligence as Jupiter ignites into a Star and becomes Earths second Sun or Double Sun, in 2010 the Year of the Tiger. Twin Suns seen over Washington DC in from the fillm. 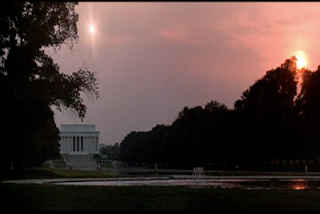 Terry Crews just off his 2010 Tiger raises his Kundalini with Double Sun Power!!!!

Crews then approaches a Pillar, to go with the 2010 flow we can see this resonating with the Monolith. We can also see this as the spinal tower of the Antahkarana Bridge between Heaven and Earth. 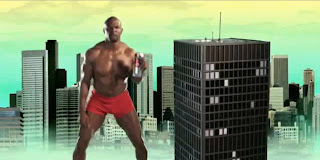 Crews then kicks the top off the Tower and it becomes a Burning Tower, esoterically resonating "The Tower" Tarot Card symbolic of enlightenment and Kundalini ascension. 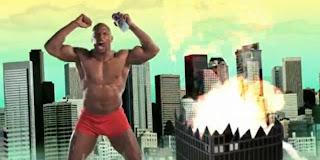 The Tower tarot card from the Thoth Tarot. 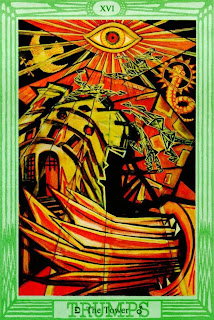 Returning back upstate I met up with a good freind, knowig that I appreciate the Esoteric he had a book he wanted to lend to me, the Sci Fi Novel "Lord of Light" by Roger Zelazny a popular 60s Fiction author who had a taste for religious symbolism. 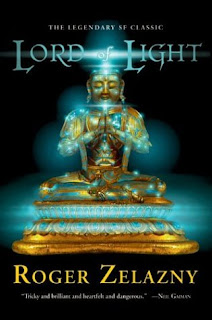 Here is a scan of the front and back of the first page. 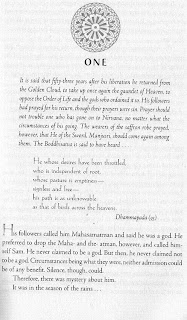 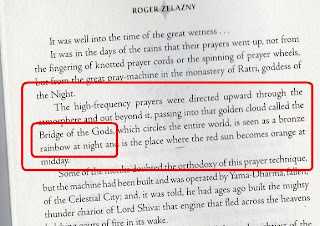 I was amazed only a page into the first chapter to find reference to the very famiiar and close to heart reference to a "Rainbow Bridge" between heaven and Earth. Just like the Antahkarana this book mentions a "Prayer machine" that sends prayers out into the infinite at the center of the Universe, but first must pass through the bronze Rainbow Bridge of the Gods that surrounds the Earth.

Lately ive been seeing Synch as partially a means by which Non-Local Realities that our Non- Physical Consciousness experiences, are demonstrated and reflected in the physical world. That is to say Art is the means by which we share transpersonal Non-Local realities, such as "Mythological" underworlds, heavens, dimensions etc. It is no wonder why that "Art" then is the modern name for the Saggitaris-Jupiter Tarot card previously known as "Temperence" the 14th Major Trump Card and the Kabbalistic path of Samekh or Serpent on the tree of Life. 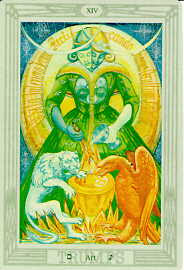 The Saggitarius-Centaur-Bow-woman Diana can be seen on the Tarot Card "Art" or "Temperence" which symbolizes the Alchemy of Unity and Duality. The Rainbow decks out the shoulders of Diana the Bow-Woman Goddess and is also behind her as she mixes the Spiritual and Physical energies, Masculine and Feminine, Conscious and Unconscious, We/Me. This Key is specifically connected to Arts of all forms, all of which are based upon balances of sounds, keys, vibrations, geometries, musical scales, color scales, etc, are all ruled by the "Art" or "Temperence" tarot card. Art is the dance of the Me and the We, the fool and his universe, and the footprint of Spirit upon Matter. Both Art and Rainbows resonate with how We/Me are bridges between Local-Physical and Non Local-Non-Physical. I also hope to share more thoughts about Synchromysticism as the study of artistic Auras or Subtle Bodies of people and objects, much like Jake Kotze has touched upon too. All of these ideas will be explored more fully in due time. Carrying along~


The Lord of Light excerpt about the Prayer Machine and the Rainbow Bridge reminded me of Jose Arguelles the 2012 pioneer and our simultaneous Rainbow Bridge articles that came out last year at the same time. Arguelles mentions a Psi Bank which holds all the varying layers of consciousness and surrounds the Earth as part of the Rainbow Bridge. more below

Im a beleiver that our prayers make it over the Rainbow, I hope to have more time here soon, thats all for tonight StarGazers, G<3d Bless
Posted by Indras Net at 7:47 PM