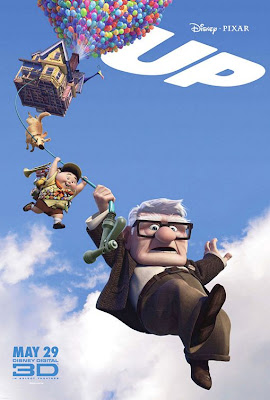 Real life Up scenario unfolding as big homemade mushroom/UFO shaped balloon with a 6 year old boy inside floats away. 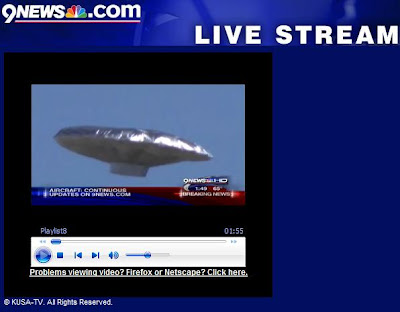 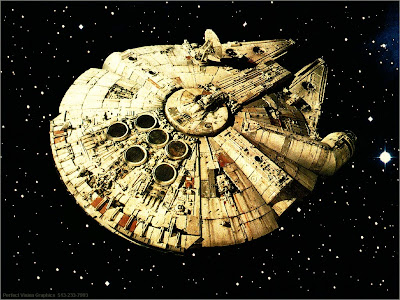 Syncwinnipeg The movie UP LIVE now on 9News of the Millenium Falcon Child flying through the air. http://bit.ly/TuMON 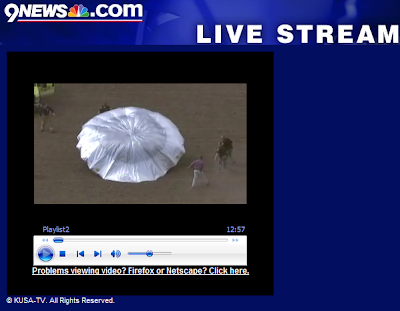 It just came down... 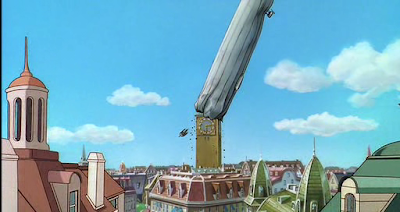 A Zeppelin crashes into a clocktower with a bright yellow sun/flower. 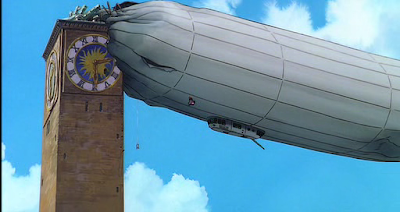 Very strange.
I saw this a few hours ago while watching "Kiki's delivery Service" and proceeding to read UP on the Hindenburg Disaster. 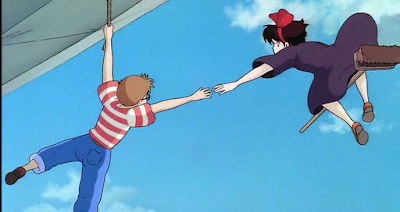 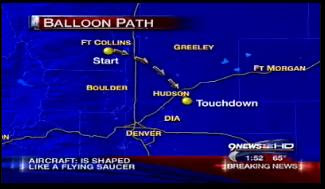 An old Blob post Divine Dirigibles goes into how airships are resonators of UFO's, mushrooms and Atlantis. 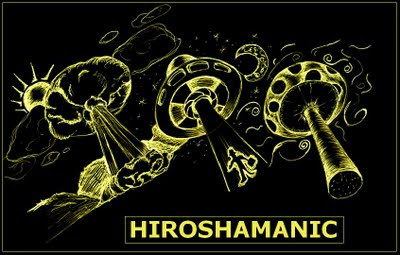 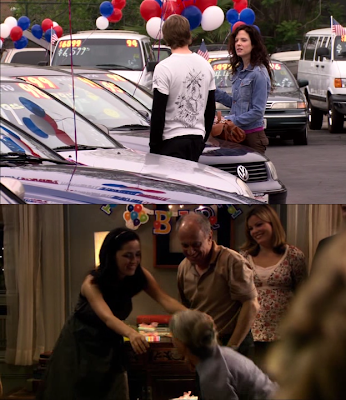 Balloons crowning Mary-Louise Parker in Weeds and Rose Byrne in Damages today. Both shows I'm following with balloons on the same day as this news story and writing the above lot.
Come on. 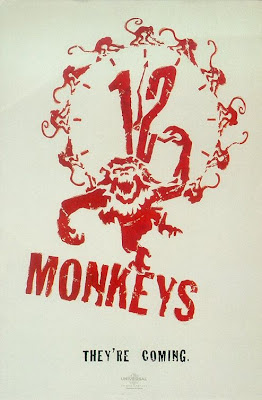 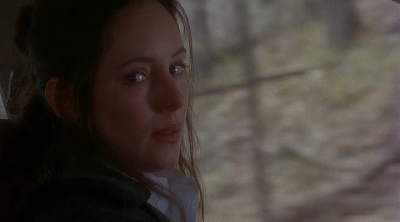 RADIO NEWSCASTER (o.s.)
-- an hour ago have been unable to
determine the location of the boy in the
150 foot shaft...but a TV sound man who
lowered an ultra-sensitive microphone into
the narrow tube claims he heard breathing
sounds coming from approximately seventy
feet down...

RAILLY
Does that disturb you, James? Thinking
about that little boy in the well?

COLE
When I was a kid I identified with that
kid, down there alone in that pipe...a
hundred feet down -- doesn't know if
they're going to save him.

RAILLY
What do you mean -- when you were a kid? 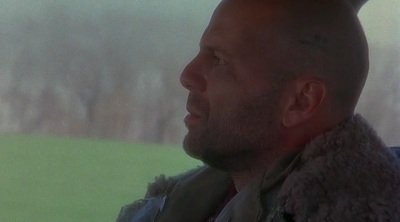 Later in the movie... 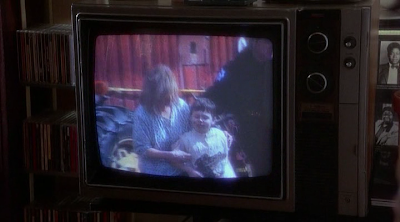 RAILLY
(glances sadly toward the TV)
He's dead, isn't he -- that little boy?

WAYNE
He's fine. It was just a "prank" he
and his friends pulled.

ANGLE ON THE TV SCREEN, showing footage of a sheepish nine year
old boy being led out of a barn by the police. The cops look grim.

TV REPORTER (v.o.)
Authorities have so far been noncommittal
about whether they will try to file
charges against the families of the
children involved in the hoax.

RAILLY stares at the TV, stunned. 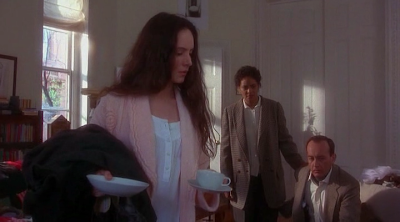 Fascinating considering the film 12 Monkeys revolves around James Cole (Bruce Willis) a time traveler with "prophetic" knowledge about the future. 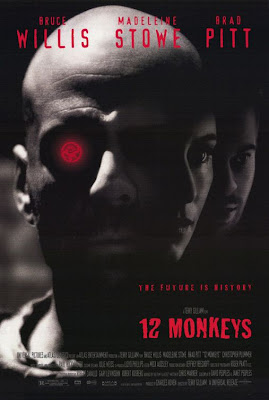 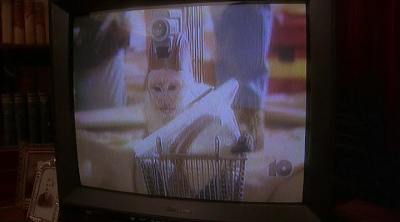 Two posters with British actor Rhys Ifans (Spike in Notting Hill) where he entrains with balloonboy.
(Thanks Jim) 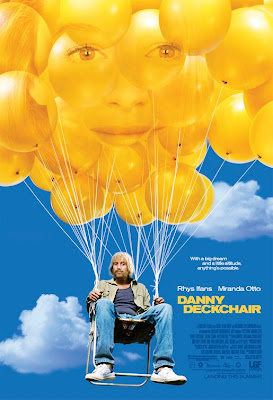 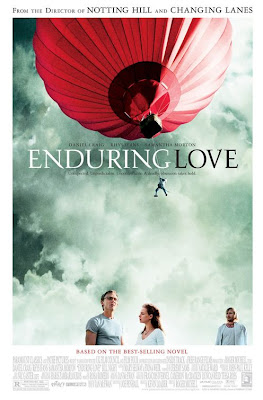 This is a fascinating thread.

The Ifans Balloon sync resounds with the post Kli'pothic thema of Supertramp's Asylum.  A quick spoiler alert.  If you have yet to see Enduring Love, beware that its finale is revealed herein.

The final image of Enduring Love is Ifans staring into the camera from his room in a secure mental facility.  Ifans, in Love and Deckchair is encoded as the ante-Dunwich Lovecraft Horror.  The Cthultu (Kli'poth), who remain a wholly external media, have seeded themselves into the Crypto-Christ.

In EL, Ifans insists throughout that the Craig character needs 'to confess' - a need that Craig can not assimilate.  The subject of this need is never articulated on screen, and although encoded into the novel, we must use character grafting to solve its meaning.

Samantha Morton, who is Craig's lover in EL, also appears in Code 46.  The ground theme of 46 is that of state controlled procreation through a Monarch style mind program.  It is because of this program that the Morton in 46 can not consummate her desire for Tim Robbins. They are brother and sister, although neither know this fact, and have been programmed by the android meme to remember the Alamo and deny their natural lust.

Now, the repentance demanded of Craig in EL is exposed as a causal reaction to incest.  This exact theme is modeled in the superb Atonement, which is from the same pen as EL.

Thus, the final image of Enduring Love can be located within the walls of Arkham Asylum and Ifans as the child of the Dunwich union, whose message is that, because of infernal incest, humanity is doomed into the moods of a madman and his dreams of angels and insects.
Posted by Jake Kotze at 12:27 PM