Joy's Secrets (on the Rise) 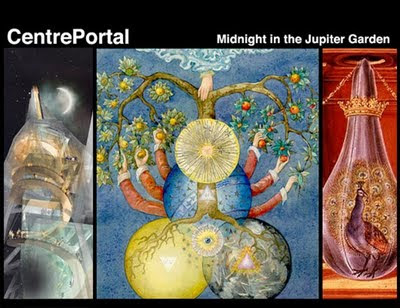 On July 30th, 2011, the Winnipeg Free Press ran 2 articles side by side about my two favorite things - Manito Ahbee & Jupiter. You can read the Manito Ahbee article Whiteshell's Sacred Stones & the Jupiter article Seeking Jupiter's Secrets.
When I saw the newspaper I tweeted about it. Here are the tweets. 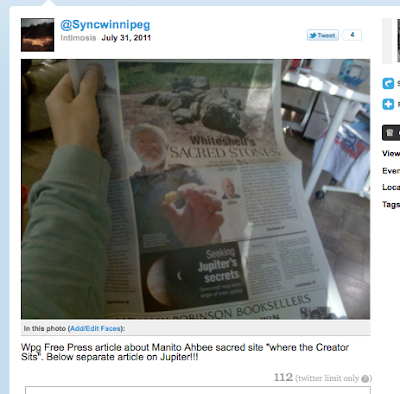 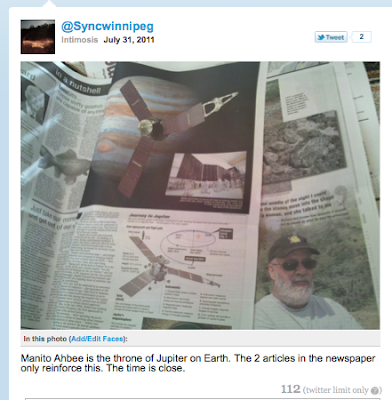 To give you context why I was excited to see these two articles that "just happened" to be side by side in the newspaper I have pasted a full blog post from my Centreportal blogspot that I wrote on December 21st, 2008.

Below is the post titled TIE CREEK - WHERE THE CREATOR SITS. 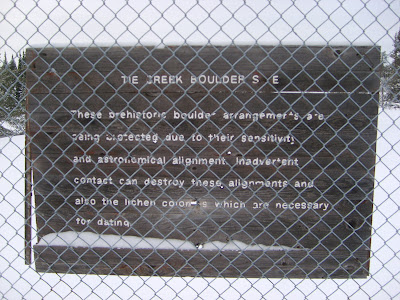 "TIE CREEK BOULDER SITE These prehistoric boulder arrangements are being protected due to their sensitivity and astronomical alignment. Inadvertent contact can destroy these alignments and also the lichen colonies which are necessary for dating."
Last year for the Winter Solstice and the conjunction of Jupiter and the Sun (December 22, 2007) I hiked out to Tie Creek and performed an Ayahuasca ceremony with two of my close friends. 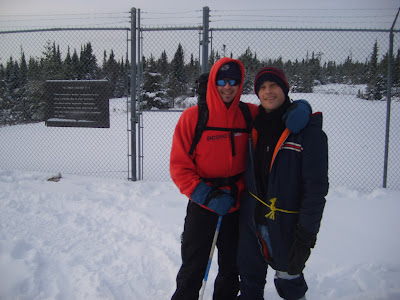 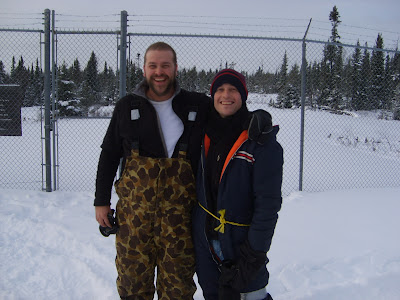 Tie Creek is the centre point of a many kilometre wide medicine wheel whose cardinal points are marked by rock formations of various animals and designs. The medicine wheel and the area it encompasses is called Manito Ahbee, which in Anishenabe means Where the Creator Sits. 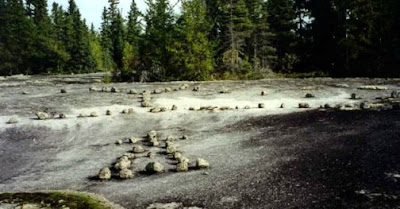 The Elders teach that the formations are creations of spirit intended to teach the people spiritual truths. Manito Ahbee, and especially Tie Creek are considered a University of the Ancients. 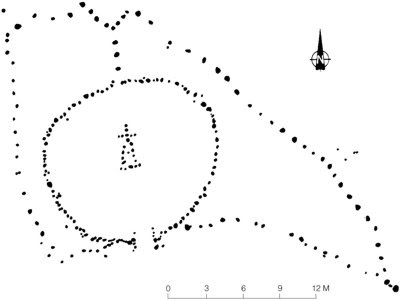 For the indigenous people of the area, Manito Ahbee is their Genesis point where the first human descended from the heavens (specifically the Pleiades) on a sky rope.

Not too long ago, the Midewiwin society, an Anishenabe shamanic society, still used the Tie Creek site for training its initiates. As I understand this is done less and less as the site is hard to reach.

It took us four hours dragging sleds to get to the site. 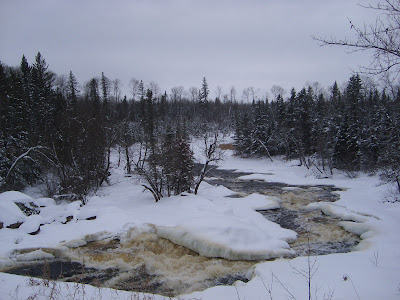 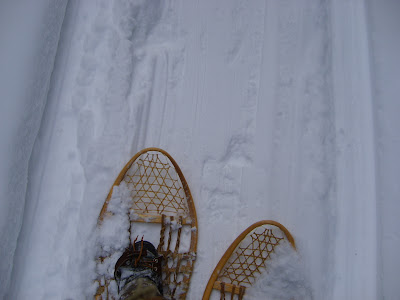 A hard hike, yet beautiful and serene as well. Luckily, the temperature that day was only -5 Celsius, unlike this year where we are hovering in the -30 range. 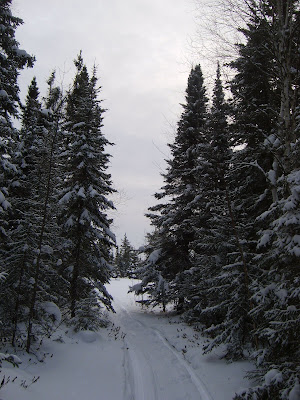 In 1978, this central site was encircled with a nine acre barbed wire fence. Jack Steinbring, at the time a professor at the University of Winnipeg, had been studying the rock formations and demanded that the site be fenced off as to protect it. Work on the Tie Creek site was what inspired the invention of the word petroform.

"the largest petroform site in North America. It covers nine acres. It has seven interconnected features, one of them over a hundred feet long. One has a bird shape, one is a huge rectangle, there's a circle with a triangle in the middle, and a great elliptical shape." 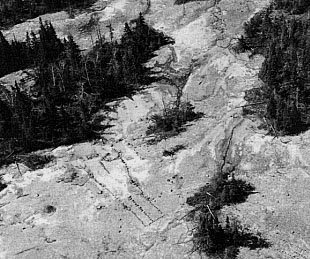 At the southern point of the medicine wheel are rock formations known as Bannock Point and it is this site that is open to the public for viewing, but Tie Creek, the centre, is mostly unknown and is maintained as a mystery. Ever since the fence went up, access is even more restricted.

As Mr Steinbring puts it, there is only "One gate, one lock, one key." 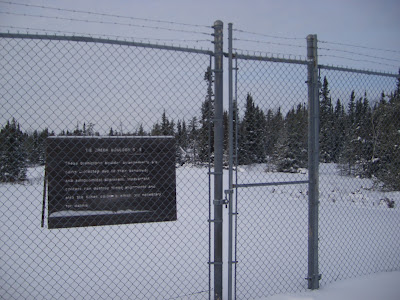 I first learn't about Tie Creek from Frank Albo, who as a research fellow at the University of Winnipeg was charged with writing a report on Mr. Steinbring's past work on the site. After reading a report on the site given to me by Frank, I mentioned to Frank that it seemed way too much of a coincidence that a site as significant as Tie Creek was only an hour away from a site as significant as the Manitoba Legislature, and that to top it off both are situated in the centre of the continent.

Frank, who has been mentioned on this blog, is the researcher who has uncovered the architectural wizardry and occult intentions behind the Manitoba Legislature. 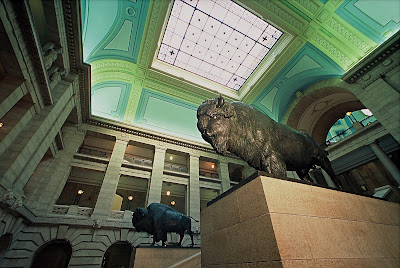 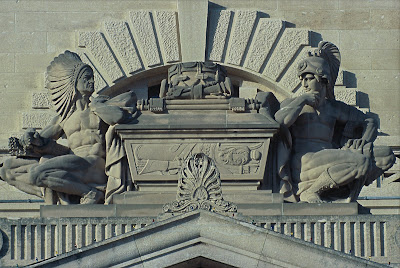 Just recently, as part of his Red Ice Interview, Frank agrees that there could perhaps be a relationship between both sites. (unfortunately he mentions this during his members only half of the interview).

But what is that relationship and why?

The more the mystery unfolds, the more I am convinced that both these sites are pointing to something special. Spirit is trying to tell us something.

Heck! Why else would the Manitoba government just recently spend 2 million dollars and hire a NY ad firm to change our slogan from Friendly Manitoba to Spirited Energy? 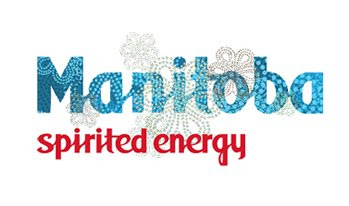 My hunch is that the message has to do with a balance between both sites, between the city and the country, between God and the Goddess, between Hermes and Aphrodite. The birth of the Hermaphrodite or the Son of Kosmic Konsciousness. 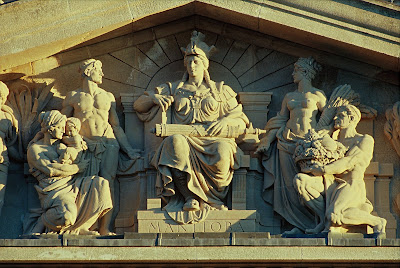 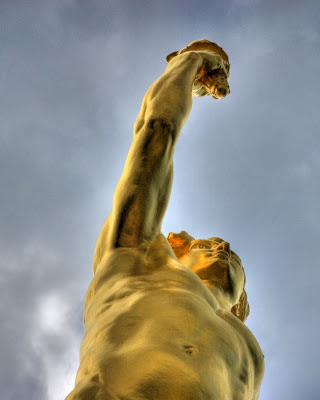 We will have to see won't we.

On this day last year, with permission from the sacred site's gatekeeper, myself and two of my friends spent the night at Tie Creek on the longest night of the year and ready to receive the power of Jupiter as it moved behind Grandfather Sun and jolted us with its Jovial energy. 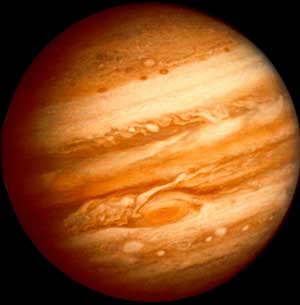 Not to mention a Full Grandmother Moon giving us balance and a boost of lunar energy. 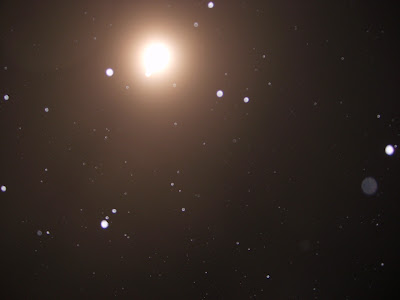 As the sun set, we set camp and started a fire to keep us warm. Once warm, we began the Ayahuasca ceremony. 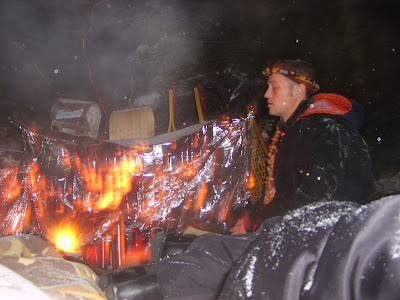 It was a night of communing with the spirits of the place. They where happy we had made the trek. Here is a short video I made last year of the trip to Tie Creek.

P.S. I presume a day soon will come when the people will return en mass to this site, something that has happened many times before. This is what is said in many of the indigenous prophecies of the Turtle Island (North America). The Elders are having the visions and dreams of what is to come.

The fence will come down very soon as the people awaken and return to the/their Centre.

The pilgrimage into the Newly Ordered World.

Now that you can see why the sync of the Tie Creek & Jupiter articles got me excited. For myself it is a powerful sign that the revelation of Jupiter's secrets will soon be known on Earth.

In the summer of 2009, last time Maestro Flores traveled to Manitoba, we organized a trip to Tie Creek to do an Ayahuasca Ceremony. Blessed with the key inside the gates, we spent a night at the site. The moment I walked into the site with Maestro he shared with me that this site was his home. That his people had come from here. That Tie Creek was PAWA as he put it. The Point of Creation. Where Creator Sits.

In this next video, a teaser trailer for Nosis, we see Juan Flores explaining the meaning of the Tie Creek sacred site and our visit to it. During this visit in 2009 to Tie Creek, Juan told me that my trip to the site to do ceremony in 2008 was what opened the door for this visit to be possible. Sure felt like it.

Here are 2 more videos that delve deeper into this mystery of Tie Creek & Jupiter. The first is a video I made of Maestro Juan Flores talking about the meaning of Jupiter for us here on Earth.

This other video is one I shot last night (8/3/11) where I show the sync of the 2 articles in the paper plus sing a Jupiter icaro that really sums it all up in my mind at least.

Tomorrow, or Awegust 5th, is launch day for the Juno spacecraft that is heading to Jupiter to "lift the veil" as the article suggests. Something tells me we will not have to wait the 5 years until it reaches Jupiter before the veil is lifted and we all learn of Jupiter's secrets.

Some extra sync hunny is tasted when we realize that the first human to step on the Moon, Neil Armstrong shares his birthday tomorrow with the launch of Juno. This particular Moon/Jupiter sync fractal is omnipresent. Rise of the Planet of the Apes syncs swimmingly with 2001: A Space Odyssey which is the story of apes from Earth that go to the Moon and then Jupiter. Maybe Mr. Morgan can enlighten us more on this end?

Looking at the two movies opening tomorrow the jovian signs and syncs only become stronger. 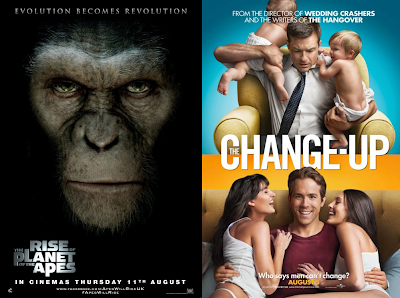 Both RISE of the Planet of the Apes & The Change-UP suggest a lifting upward and a change of order.

The end of this ascension cycle is almost complete.

Time to Rise Up!

Much joy to all

The theme it seems is cause and effect. Evolution in general can be better understood if the "one thing leads to another" antithesis is considered.

The monolith is the facilitator of the Evolution of man in the movie 2001 : A Space Odyssey. The year 2000 we all anticipated a change that did not truly come until a year after. Sense then our reality tunnels on what the world is, was, and could be changed. We have been taken to a horrible realization that sticks and stones lead to balls of fire and the "possible" vaporization of steal.

In 1968 2001 the movie began it's trip or Odyssey. The same year that the first Planet of the Apes came out. The underground was tripping its bananas off and watching these movies. Milestones themselves on what we thought is, was, or could be. Movie "Magic" really works cause the population was introduced to people on the Moon a year before it happened in '69. The monolithical silver screen shaped usher in of our Evolution was the movies. A Mirror of sorts. We become self aware at the movies. We make shit happen. We ARE Truman.


1968 was also the year that construction started on the WTC. Not that that means anything of course. And now ten years after the 2001 release of Tim Burton's Planet of the Apes. We see nothing short of Revolution. The Rise. The Change Up. One thing leading to another.Which will probably be seen in real time come next year.

That movie 30 Minutes to Live or what ever has something to do with this and I wonder if there's another sync head whose got a theory. 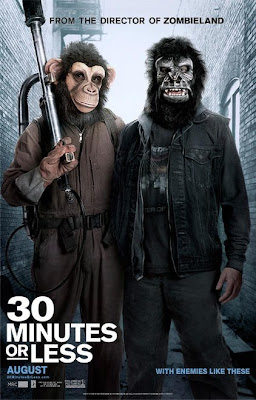