One Rainbow to Rule them All 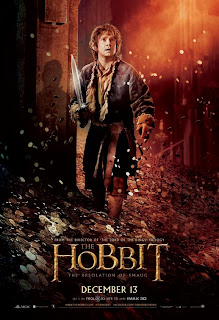 On December 13th, 2013, the second movie in The Hobbit trilogy directed by Peter Jackson opened in theatres. This one is called The Desolation of Smaug.

The Hobbit refers to Bilbo Baggins played by the actor Martin Freeman who also happens to play Arthur Dent in the movie Hitchhiker's Guide to The Galaxy. 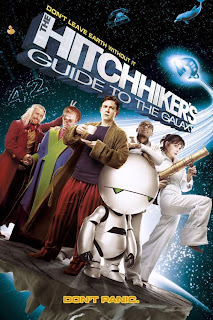 In Hitchhiker's Guide to The Galaxy, Freeman's character lives on the Earth which is actually a computer created to find the Ultimate Question. He is one of two people who escape its destruction before it can finish its 10 million year long computation. After his escape he sets off on the Heart of Gold spaceship on an intergalactic journey for the answer (question?). 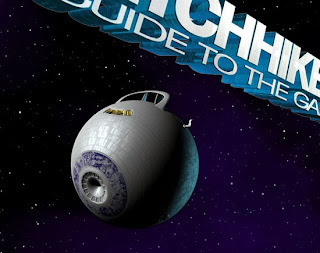 We learn in Hitchhiker's Guide to The Galaxy that before the Earth was made as a computer to find the Ultimate Question, that a computer known as Deep Thought computed the Ultimate Answer to be the number 42.

Martin Freeman is intimately part of the quest to understand the significance of the number 42.


In The Hobbit, Freeman is on a expedition to steal the Arkenstone from Smaug, the Red Dragon in the mountain.

The Arkenstone is known as The Heart of the Mountain. The precious and powerful stone of white light is found immersed in a sea of golden treasure guarded by the Red Dragon. 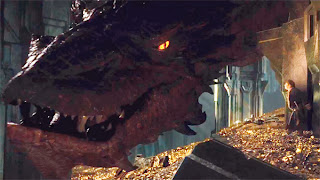 (Heart of the Mountain = Heart of Gold) 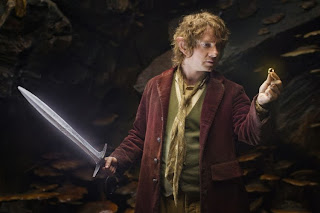 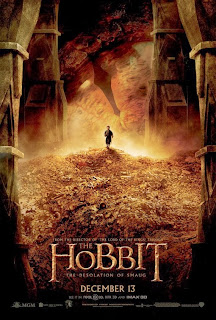 It is sweet sync that Freeman must depend on the Ring of Power in his search to find the Arkenstone.

When I see the word Arkenstone in the midst of all this 42 and rainbow sync I immediately associate the rainbow as an arc. In Genesis, God reveals a rainbow's arc as a sign of a new covenant with Noah after he built the ark to escape the flood.

The Rainbow Ring of Power. 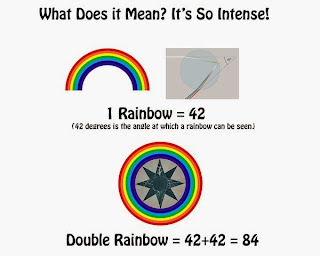 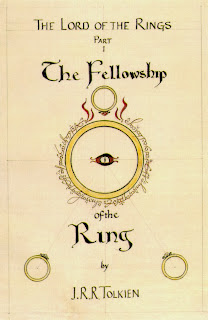 Martin Freeman wearing a rainbow hat. He's feeling it for sure. 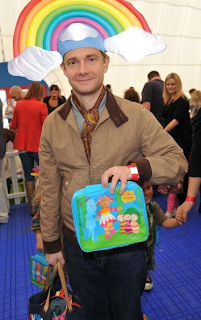 Both quests played by Freeman find resonance with the Rainbow.

When we see a rainbow we are seeing the top red part of a rainbow at the angle of 42 degrees. At 42 degrees the colour red acts as a gateway into the purple (infinite) centre.

Perhaps its best to think of the rainbow as a full circle. or orb, with you at the centre. Seeing the red at 42 degrees symbolizes the beginning of your awakening into realizing your purple heart full of infinite love at the centre of everything. 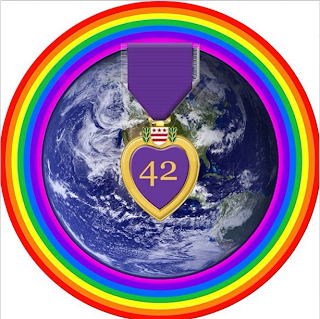 Crossing that red line of self awareness is like slaying the Red Dragon in search for the treasure of gold, or in other words going over the rainbow in search of the pot of gold. 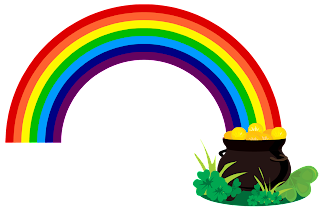 The 42 Red Dragon encircling the Earth. Our perceived prison. Reminds me of the ancient symbol of the Ouroboros, the snake that eats its own tail. 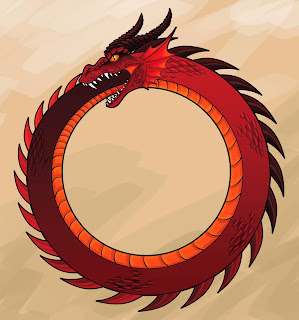 Anyone who has gone down this journey will tell you that the gold on the other side of the rainbow is not real gold or of anything material, but rather the gold of existing in a permanent state of love.

Chasing real gold or anything less than unconditional love will be like chasing your own tail.

But with love we can transcend the red and reach towards the centre source of being.

This is the place where silly things like movie stars and the movies they are in become windows into understanding the divine infinite and gateways to peace on Earth.

On Thursday the 5th of December Nelson Mandela aka Madiba passed away.

I was born and raised in apartheid era South Africa and had just become a teenager when it ended and Mandela became president.

For me the philosophy of apartheid is symbolic of our identity's seeming desire to be separate and cut off from the whole. An unfounded fear exists that without boundaries the sense of who we are is lost. It is a fear to let go and be what we are, whole and complete already right now.

That you can be a unique and thriving individual while being aware of your undivided reality is the state of consciousness we are all rapidly realising and the engine of all the dramatic shifting around us.

Events are all symbolic of the unfoldment of our self realisation and that Mandela - the Father of the Rainbow Nation - has arisen in consciousness brightly, right at this moment, is a powerful sign. The fundamental apartheid (divideness) of our awareness is ending globally and we are all meditating on the man who did the same on a fractal level in South Africa.

In the video above "Madibow" I primarily show the sync relationship of the Rainbow Arc to the most prominent actors who have played Nelson Mandela in film, Idris Elba and Morgan Freeman.

The goal (as always with sync) being too highlight how the non-local trans-conceptual mind (aka the heart) of all that is orchestrates creation. Simply put I don't believe it is possible that Morgan Freeman being both the Father of the Rainbow Nation and God telling Evan to build an Ark is just a coincidence. The poetry of interactive symbolism and metaphor is way too powerful, it shows how existence is the manifested interconnected play of the creator. 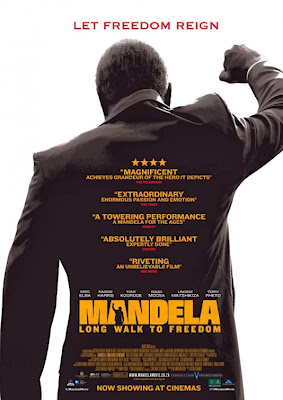 JenBow from Jake Kotze on Vimeo.

Madibow is named after JenBow, a video made in early 2009 about Jennifer Aniston's repeated interaction with the Rainbow. Years later we realised how she is born on the 42nd day of the year aka 11 Feb and how perfectly this relates to the already noticed rainbow connection. The historic date that Mandela was released from prison, setting into motion the creation of the Rainbow Nation, is also 11 Feb, as highlighted in Madibow.

Currently me and Jim Sanders are working on a new Jennifer Aniston Rainbow video and this is part of the impressive entrainment of Mandela's passing that lead to the quick creation of Madibow.

Rainbows are big this week, big code rolling in.

This week the Chinese Lunar rover JADE RABBIT landed on the part of the Moon known as the BAY OF RAINBOWS. 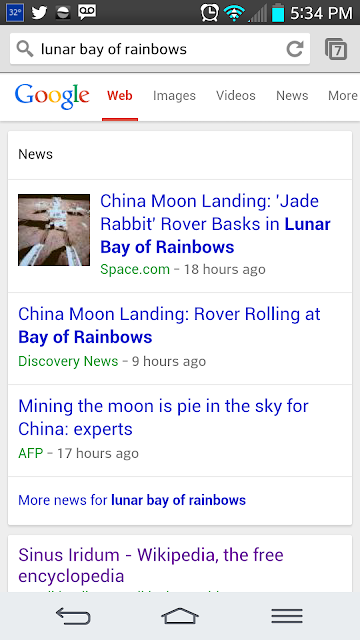 To see why Rabbits and Rainbows Sync together so nicely check out my video series Film: a Thin Skin or Membrane. Basically the Rabbit constellation Lepus was seen by the Egyptians as a Boat that took one to meet the Goddess of 42 Principles who represents order truth and balance (Maat). We know from the above images that Rainbows are created at a 42 degree angle. The Egyptian afterlife aka life "Somewhere over the Rainbow" resonates our participation in the eternal nature of things, like much of the 42 sync does.


Film- A Thin Skin or Membrane Part 1 from Kevin Halcott (@indradhanush42) on Vimeo.

Also we see the Rainbow make waves defying the linear model of the big bang, the Rainbow hints at our nature beyond form and time. As we awaken to our eternal union its chief symbol the Rainbow continues to find itself in resonance with humanity. 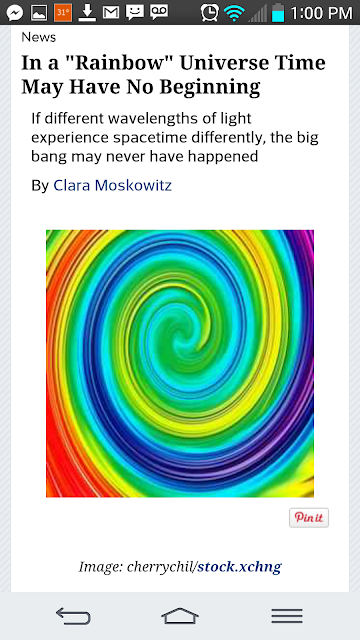 I was also amazed this week to see that scientist proposed that a jewel resides at the heart of quantum mechanics. I chose my blogger name Indra's net years ago, because this story of a heavenly web of jewels that reflect and connect all things sounded like an ancient metaphor for quantum mechanics and synchronicity. I later found out that the god Indra had another spelling of his name that being Indradhanush, which means Indra of the rainbow. He was also associated with lightning which provides an interesting connection to Zeus Jupiter and 42.  The Rainbow is a powerful symbol that narrates our awakening to cosmic unity as well as our relationship the eternal nature of things, and by things I mean the Unconditional Love that is the basis for existence itself as Jim mentions above.

I love the Rainbow hue on the image of the quantum jewel and the album cover featuring Jewel, a Rainbow, and a Web which is a resonator of Indras Net, and the Internet, old and new metaphors for how everything is seamlessly connected and in Sync unity. This Jewel at the Heart of Quantum Mechanics also resonates the Ring of Power at the Heart of the Mountain mentioned from the Hobbit Above.  As we begin to recognize Sync we get a little more hip to how the great flow of things operates, in the case of the Rainbow, we can see that this powerful symbol appears to be part of the unveiling of the Unity of things 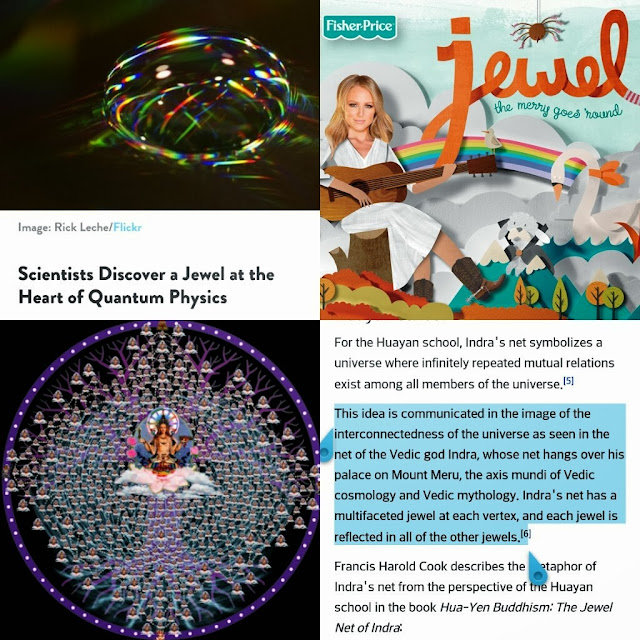 I also just noticed a beautiful Sync of Kier Dullea aka David Bowman or DB who travels to Jupiter/42 in the film 2001 a Space Oddysey, will be staring in, wait for it 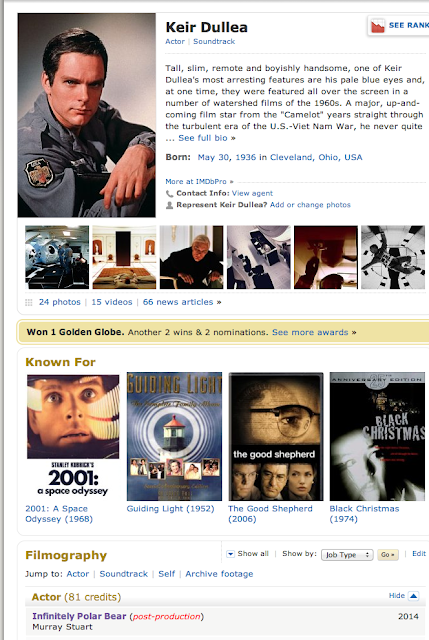 I had my mind blown by this epic Ark/Arc/Noah/Rainbow/42 /Jupiter connection fully fleshed out by associating Kier Dulleas roles in Odyssey and Starlost. Incredible!

This is all ki

nds of cool because the story of the realization of Sync is greatly tied into 2001 a Space Oddysey, which entrains strongly with the reality shifting event 9/11/2001, an event drenched in synchronicity and potent narrative of global cosmic consciousness awakening. 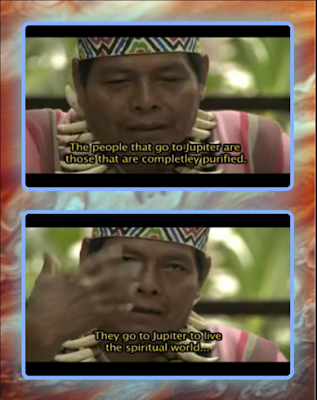 Our resident Syncster/Healer Jim Sanders, studies the plants with Ashanincan healer Juan Flores. Juan had a vision not long ago of our current stage in evolution, and he called this vision "Oso Blanco y Pachamama" The White Bear and Mother Earth. In this image created by Jims pal Darcy J Watt, we can see the POLAR BEAR reaching for Jupiter which appears to be connected to the Sun ( 2 Suns as seen in the 2001 sequel 2010 the year we make contact). Juans teachings, 2001 a Space Oddysey, and the 9/11 event all entrain with the unfolding narrative of human evolution, world peace and unity consciousness, all these things/events/peoplea are what the Jupiter/Rainbow/42 sign appears to point toward. 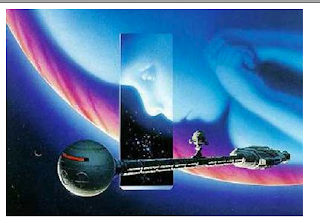 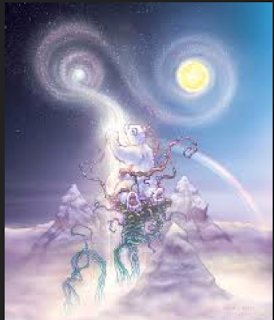 Ayauasca is the Stargate Sequence of the Soul

Here is a song about the White Bear created by Jim with inspiration from the Plants.